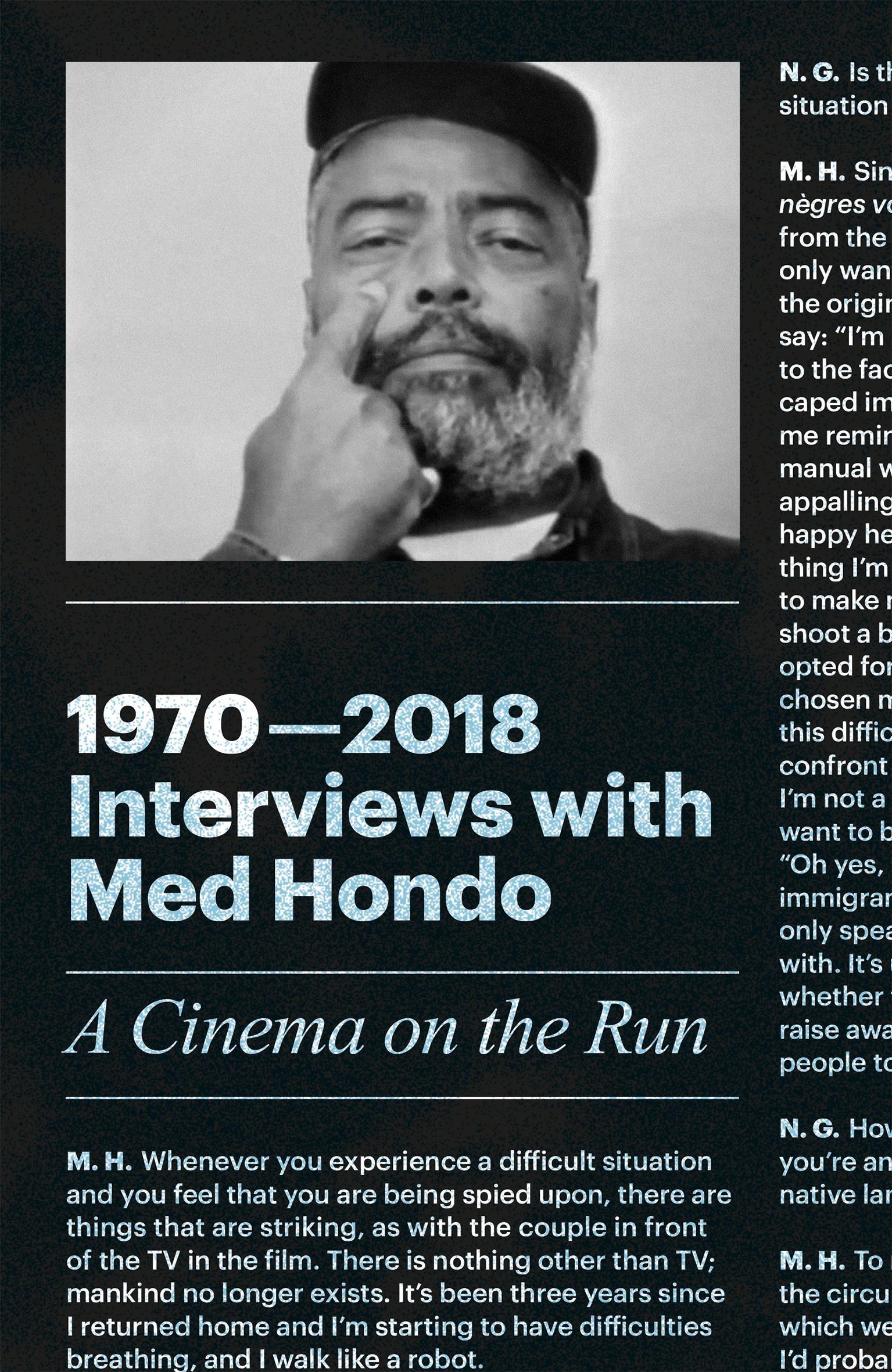 1970—2018 Interviews with Med Hondo, the first
volume in a three-part publication, brings together seventeen interviews conducted with Med Hondo over a period of almost half a century, most of the interviews originally published in French were translated into English. The book originated in the long-term project Cours, cours, camarade, le vieux monde est derrière toi—Run, comrade, run, the old world is behind you—The Cinema of Med Hondo.

To read Med Hondo opens us up to many perspectives: to his work and its time-historical contexts, to his interests and obsessions, to his standpoint with regard to the intertwining of politics, economics, and culture. Med Hondo describes the school of pronunciation until such point as the slightest accent is erased; he observes the insults immigrants in France have had to tolerate, and fuses their stories and histories with the present; he builds bridges to the Caribbean and to the Western Sahara, to Algeria and Burkina Faso, to Niger and Senegal, to South Africa and the USA. This publication aims to draw attention to Med Hondo’s cinema and legacy. 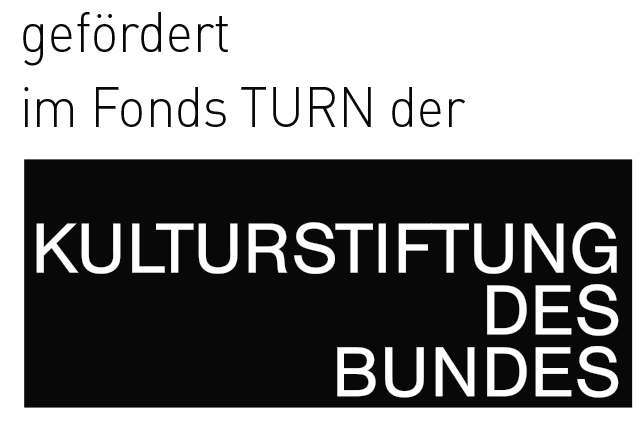 On the Run, Perspectives on the Cinema of Med Hondo, features contributions that pay tribute to Med Hondo’s films in highly contrasting ways. It is published as part of Cours, cours, camarade, le vieux monde est derrière toi—Run, comrade, run, the old world is behind you—The Cinema of Med Hondo. ‎Read more 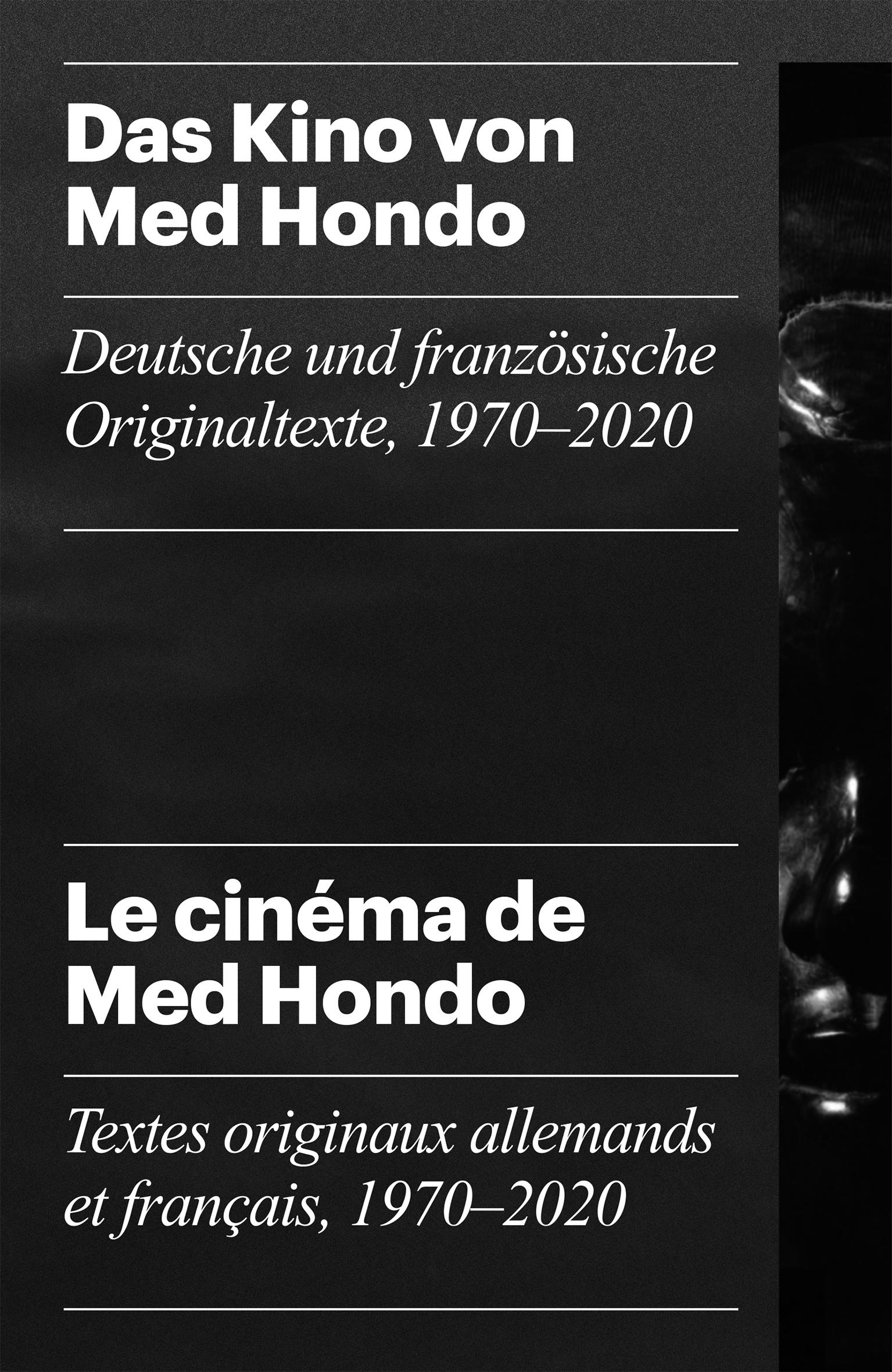 This publication consists of twenty-two essays and interviews in French and German, the texts are part of 1970—2018 Interviews with Med Hondo and On the Run and appears in this volume in their original language. This assemblage of voices portrays Med Hondo’s uncompromising and groundbreaking production. ‎Read more
Download

We are running into a great danger, my brothers, if we are not careful, this precious and cultural instrument of information, enjoyment, struggle represented by the cinema is slipping through our fingers forever. —Abid Med Hondo, Les bicots nègres vos voisins, Prologue, 1978

Throughout the world when people use the term cinema all refer more or less consciously to a single cinema, which for more than half a century has been created, produced, industrialised, programmed and then shown on the world’s screens: Euro-American cinema. This cinema has gradually imposed itself on a set of dominated peoples. With no means of protecting their own cultures, these peoples have been systematically invaded by diverse, cleverly articulated cinematographic products.

↑ Excerpts form “What is Cinema for Us?” first published under the name Abid Mohamed Medoun Hondo in Framework (Issue 11, autumn 1979) in a translation by Greg Kahn and reprinted in a slightly edited version in Jump Cut, no. 31, March 1986, pp. 47–48. And, “The Cinema of Exile” is based on an conversation with Med Hondo from 1974, revised and first published in French in: Claude Michel Cluny, Dictionnaire des nouveaux cinémas arabes, Paris: Éditions Sindbad (La bibliothèque arabe), 1978, pp. 375-383, translated into English by John D. H. Downing and re- published in his anthology Film & Politics in the Third World, New York: Autonomedia, 1987, pp. 69–76.

The night of colonialism caused many quarrels among us; we have yet to assess the full consequences. It poisoned our potential communications with other peoples; we are forced into relations of colonial domination.
We have only preconceived and false ideas of each other imprinted by racism.

I have established a national cinema, even though conceived and put together outside my country. For, if exile remains as the worst thing, what is essential, in the heart of that worst, is to be conscious of what has to be struggled against. And what is vital for us, here and now, is surely to struggle against capitalism under its different aspects and its multiple powers. Even if the struggle is only a brush-fire, it is a fire which will spread.

We, as African film-makers, must ourselves invent, on our own, the film language to be spoken to be able to be understood, one day, by our brothers. 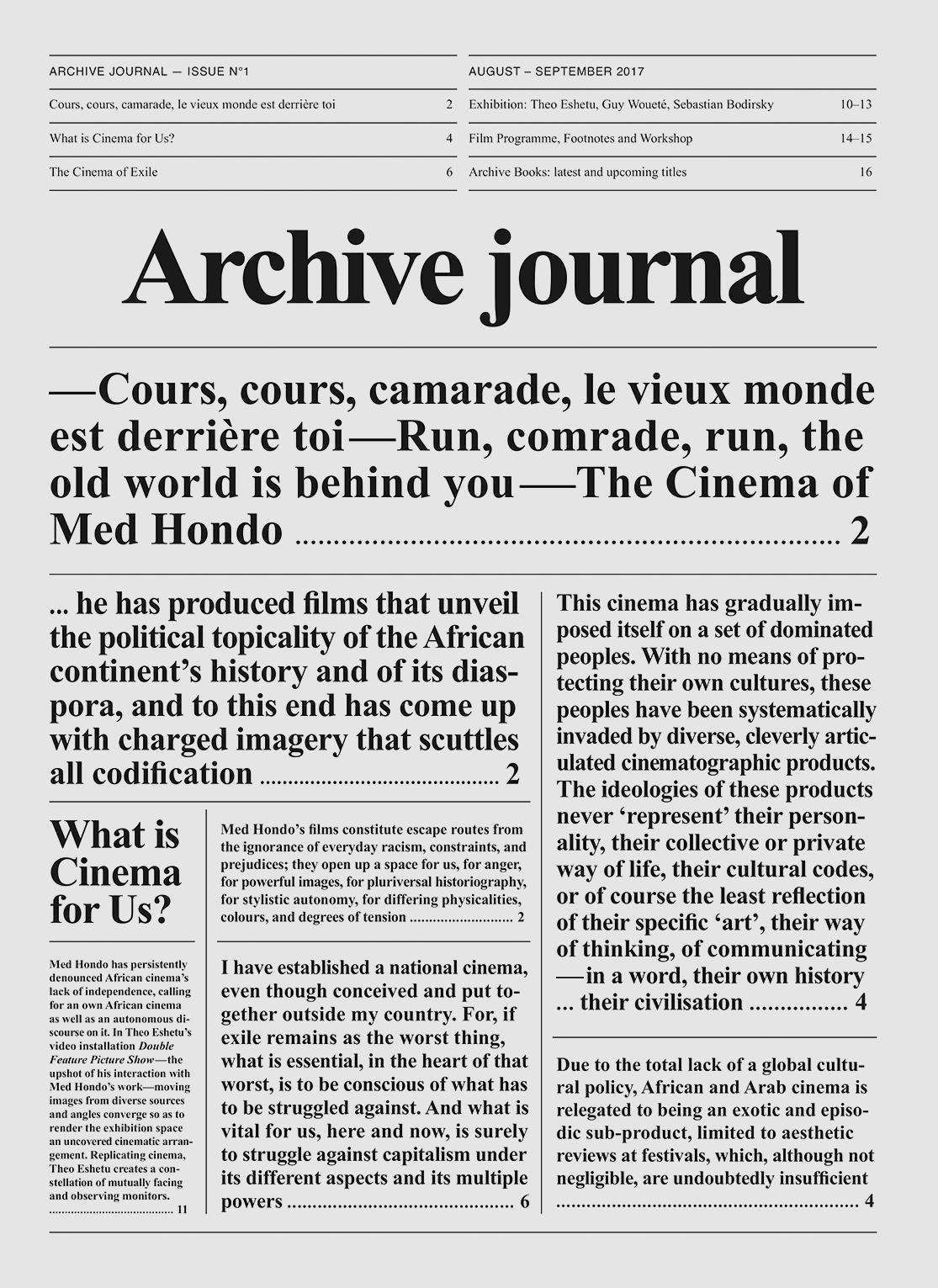 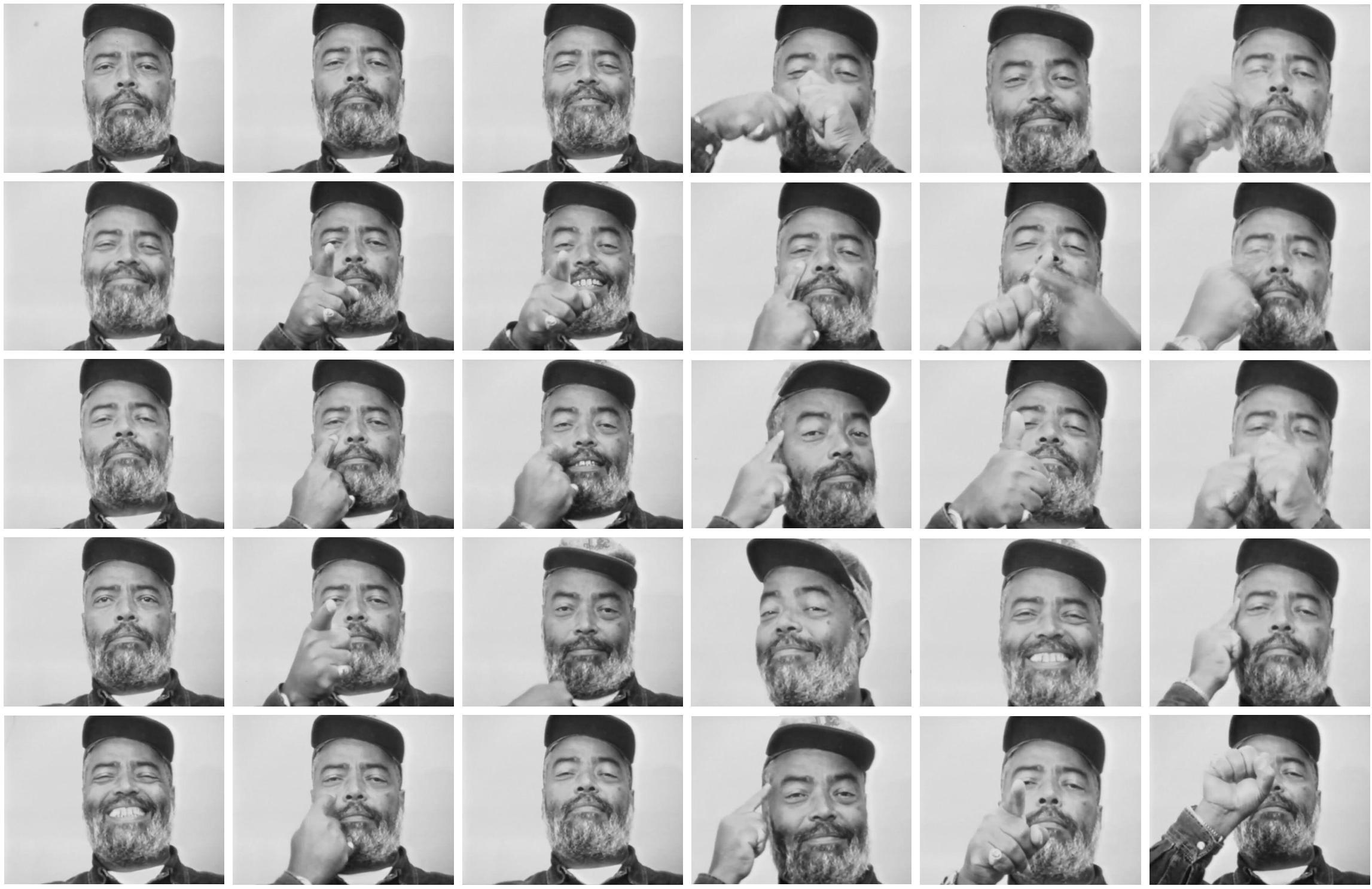 This publication is the third of a series that aims to pay tribute to Med Hondo’s cinema and to reinvigorate interest in his films. It consists of twenty two essays and interviews in French and German, published in their original language. The book originated in the long-term project Cours, cours, camarade, le vieux monde est derrière toi—Run, comrade, run, the old world is behind you—The Cinema of Med Hondo.

Intermedia and Expanded Cinema, both as critical approach and artistic practice, left an indelible mark in a period of Japanese art history that is broadly considered to be one of its most dynamic moments in the wake of its postwar reemergence. Rather than assuming the interpretations of the terms were the same as their counterparts abroad, we decided to commission translations of a selection of key texts that we felt were instrumental in shaping the specific discourse around these terms.