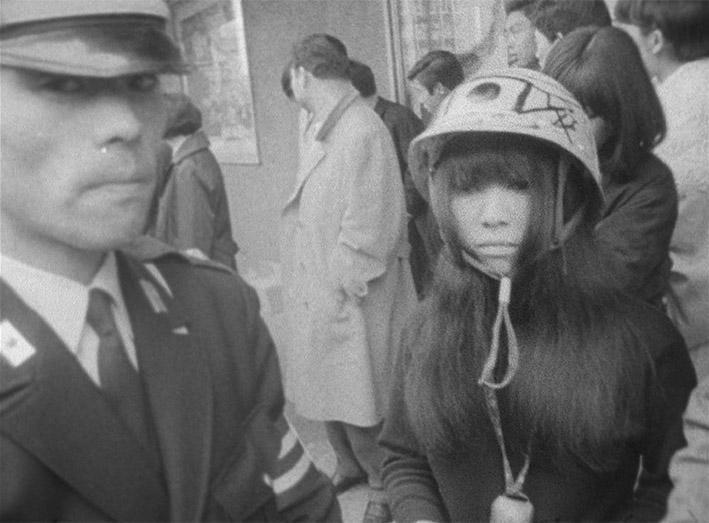 Miyai Rikurō was engaged with the conflict over the US-Japan Security Treaty in the 1960s, primarily in the field of theater, and later began working as a filmmaker. In 1966, with documentary filmmaker Kitamura Minao, he established Unit Pro as a combined living space and studio, and as the hippie movement and psychedelic revolution got underway, they produced interdisciplinary film works that transcended the framework of existing cinema. Miyai’s works in expanded cinema recognized the essential quality of film to be its reproducibility. These works included Phenomenology of Zeitgeist (Jidai seishin no genshōgaku, 1967), which condensed the spirit of 1967 into a documentary containing a long take that moved from the studio to the east side of Shinjuku Station where the Zero Jigen [Zero Dimension] group staged a street ritual/happening; Phenomenology of Differentiation (Bibun genshōgaku, 1968), a frame-by-frame sequence of urban advertising signboards; Shadow (1968), featuring a man’s shadow in negative-positive reversal; I Love Yokoo-chan (Yokoo-chan daisu- ki, 1968), which cuts back and forth between close-ups and long shots of the designer Yokoo Tadanori; and Party (1970), which applies the same approach to footage of lesbians engaged in sexual behavior. These works were shown using multi-channel projection or as performative screenings where Miyai highlighted cinema’s reproducibility by projecting two prints made from the same film negative. Miyai was also involved in events, performances, psychedelic shows, live music performances, discotheque production, and more, and he pursued cinema or the moving image not as a medium to be controlled by a single artist, but as just one of many media to be fused with others in an attempt to expand its possibilities. His text “The Phenomenological Documentary: Directions in Pop Cinema” (Genshōgaku-teki dokyumentarī: poppu shinema no hōkōsei) appeared in the February 1968 issue of Eizō Geijutsu [Image arts], and it is in effect his manifesto of cinema and artistic experimentation.

While discussing Jean-Luc Godard’s use of chance and Andy Warhol’s concept of Pop, Miyai criticized the rigidified political ideology of the Japanese postwar left and the New Left. At the same time, he recognized the shocking performances of Mishima Yukio, a nationalist at the opposite end of the political spectrum, for their nimble deployment of “illusion,” taking positions that could be extremely controversial both artistically and politically. However, he exposed the limitations as well as the possibilities of the latter approach, presenting an ontology that was neither that of the New Left nor that of Mishima. In Japan, the so-called 1968 revolution spread throughout the country, preceded in October 1967 by the Haneda struggle, which aimed at preventing Prime Minister Satō Eisaku from visiting the United States, and was sparked by conflicts in spring 1968 at Nihon University and the University of Tokyo. Miyai’s text also focuses on the Haneda struggle, noting that Mishima had defended the action, and that the magazine’s editorial board put together this special issue,“The Situation has Changed (from Mishima Yukio to Andy Warhol),” suggesting that this journal issue was assembled in response to the shock of the Haneda incident. However, while grounding his discourse in this context of political activism, Miyai sought new horizons beyond existing relationships between activism and cinema, or politics and art, by inquiring into the nature of Pop Cinema.

Eizō Geijutsu [Image arts] was the group newsletter of Image Arts Society (Eizō Geijutsu no Kai), launched in December 1964 by documentary filmmakers Noda Shinkichi, Matsumoto Toshio and others who had left the Association of Documentary Filmmakers (Kiroku Eiga Sakka Kyōkai), and published monthly with Noda as editor-in-chief. The theory and practice of the Japanese New Wave film movement, which began in the late 1950s, was largely based on ideas discussed in Eiga Hihyō [Film criticism], first published in June 1957 by filmmaker Kasu Sanpei and others, and Kiroku Eiga [Documentary film], the association newsletter of the Association of Documentary Filmmakers, first published in June 1958. Meanwhile, many parallel debates were underway in general film-industry magazines such as Eiga Hyōron [Cinema criticism] and Eiga Geijutsu [Film art]. In the late 1960s, new film magazines appeared one after another, including Kikan Firumu [Film quarterly] established in October 1968 under the auspices of the Sōgetsu Art Center and edited by Matsumoto, Iimura Takahiko, and designer Awazu Kiyoshi; Me [Eyes], founded in 1969 by the Suginami Cineclub composed of editors and film critics; and Dai Ni-ji Eiga Hihyō [The second film criticism], headed by members of the critical avant-garde, such as film critic Matsuda Masao and filmmaker Adachi Masao. While numerous theories of film, critical stances, and controversies emerged in the pages of these publications, Eizō Geijutsu [Image arts] played a crucial role in connecting the US-Japan Security Treaty of 1960 and the new revolutionary movement that peaked in 1968. Eizō Geijutsu [Image arts] temporarily suspended publication in April 1966 due to financial difficulties, and resumed in November 1966 as a quarterly with Matsumoto as new editor-in-chief, but was forced to cease publication again after just three issues. Miyai had been on the editorial committee since the August–September 1965 issue, and after the magazine was revived, he reported on a symposium on Godard, wrote on Michelangelo Antonioni, and went on to present his ideas on Pop Cinema. While rooted in cinema and the moving image, this genre expanded into new areas of theory and practice and came to be known as Expanded Cinema and Intermedia.