There is no question that ecological ideas acquired a central role in contemporary episteme. In contrast, the heuristic function that these ideas can assume in the current polarisation is questionable: that which, over the last decade, has identified the environmental crisis with the (categorical and totalitarian) concept of the Anthropocene. Ecological discourse positioned itself inside historically situated trajectories that contributed to the transformation of aesthetical paradigms and political practices. In the scenario that 1968 opened up, the transversal nature of subjectivity allowed it to cover different fields, beginning with the tension between the logic of a unitary discourse and the creation of a multiplicity of possible worlds, between the molar and the molecular, the micro and the macro. Ecological thought, as such, cannot help but conflict with that which is assumed to be homogeneous and constant, with that which forces the earth to be centred, measured, and expropriated, just as life must be biogenetically controlled, colonised, and subjected to patriarchy.

Earthrise
Ecological Visions on
Both Sides of the Wall 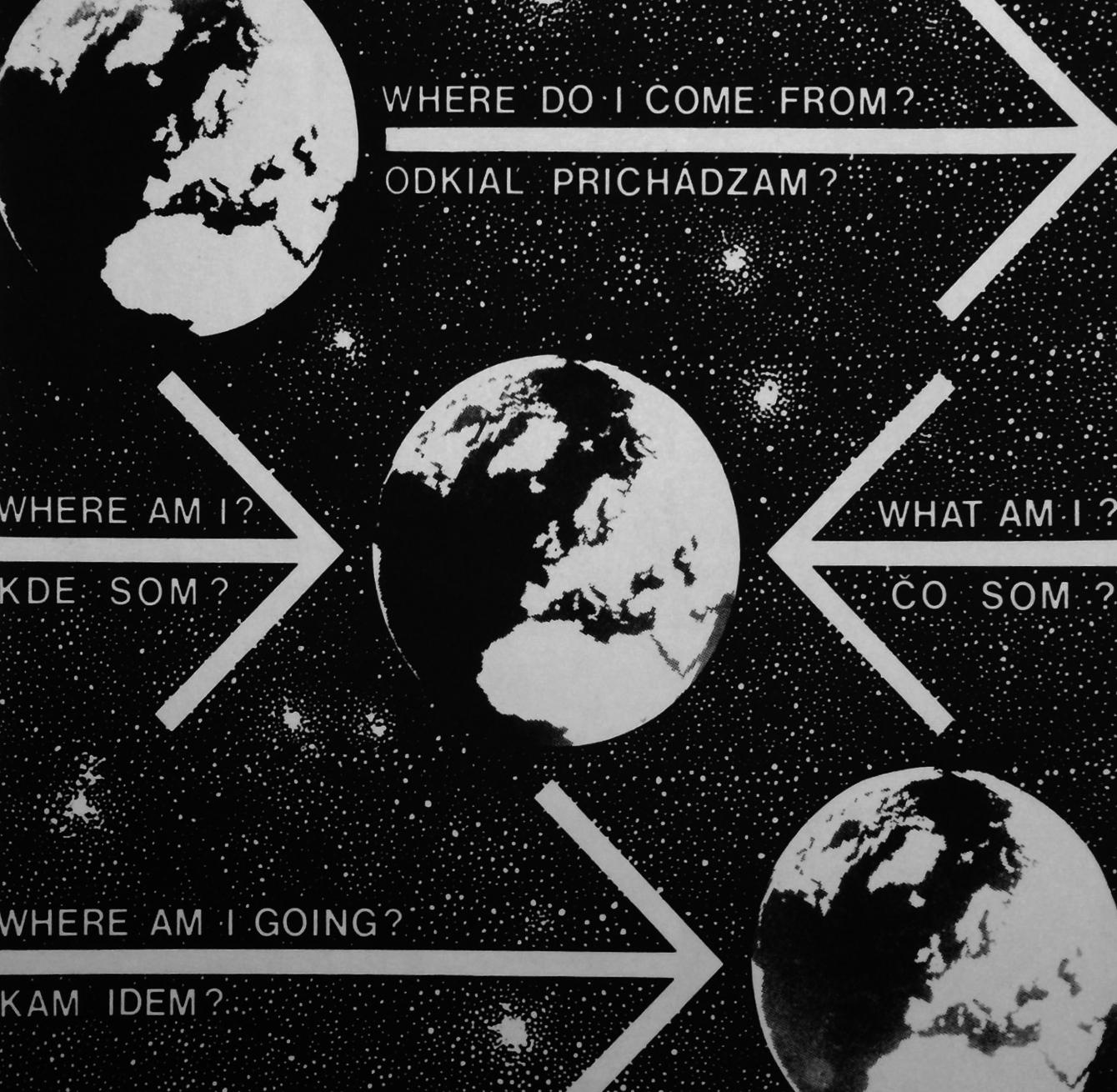 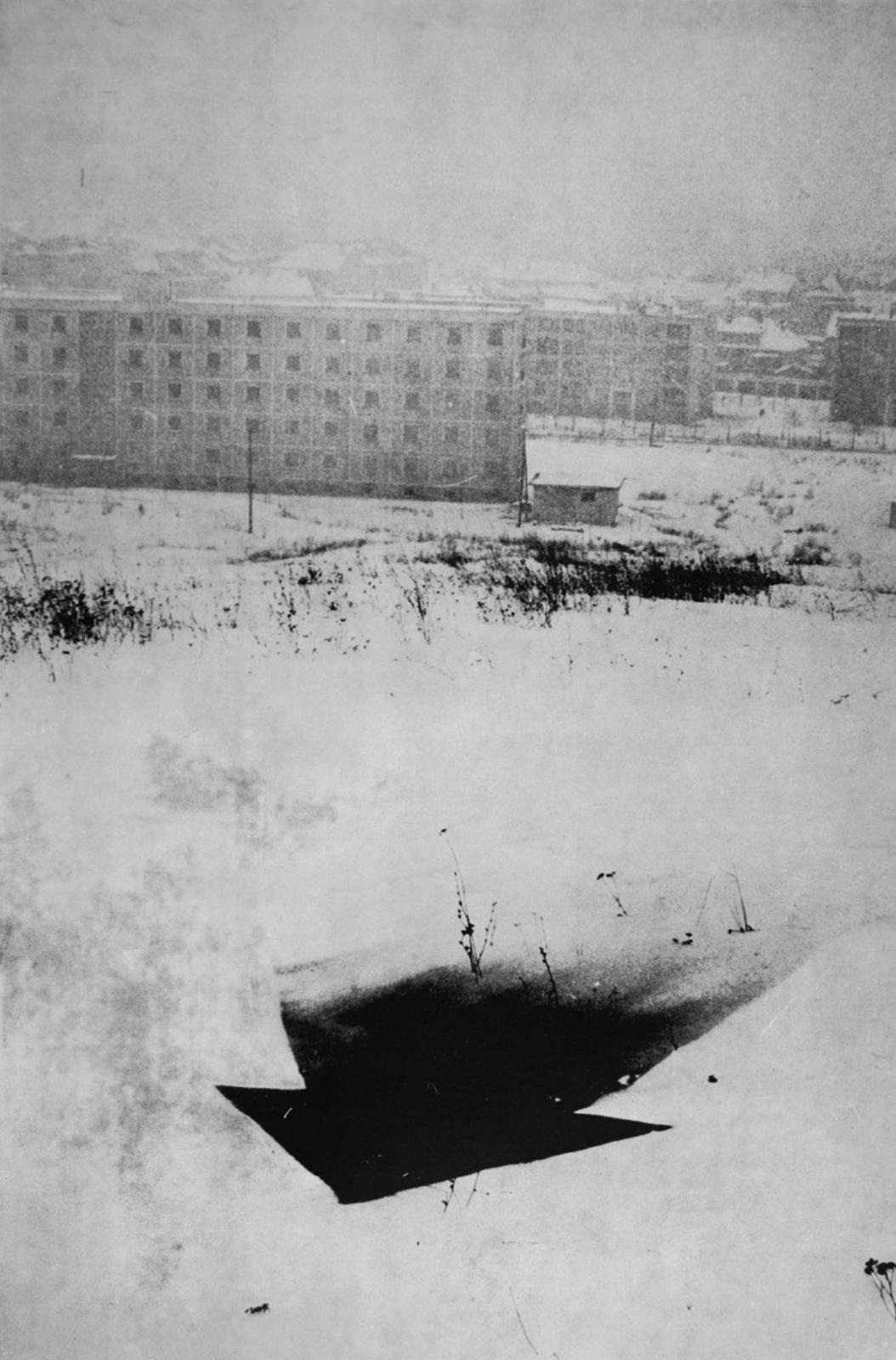 Rudolf Sikora,
Out of the city, 1970.
Courtesy of the artist and AMT_project,
Bratislava.

From the text
“For a Genealogy 27 of Nomad Science: Ecology”

In 1977 conceptual evaluation, André Gorz wrote: “Radicals who refuse to examine the question of equality without growth, merely demonstrate that ‘socialism’ for them, is nothing but the continuation of capitalism by other means – an extension of middle class values, lifestyles, and social patterns.” It is precisely because the error lies in having appropriated capitalist methods of production without changing them that Gorz concludes: “Growth-oriented capitalism is dead. Growth-oriented socialism, which closely resembles it, reflects the distorted image of our past, not of our future.” Post 1968 counter-culture, technological innovation, and ecological debate are at the centre of a new radical trend which, from the second half of the 1960s, saw a series of artists from central-eastern Europe developing, in diverse regional contexts, a multiplicity of ephemeral (performative and conceptual) practices as direct actions aimed, for the most part, at the natural environment on the margins of the cities and recorded in photographic documentation. Examples of these practices included: reporting on pollution through videos or postcards, graphic maps, and visual cosmologies (as in the case of Rudolf Sikora); the recovery of local traditions and recourse to organic materials (Imre Bukta and Ana Lupas); irrigation systems and community associations such as those inaugurated by the OHO Group in Šempas; or urban demonstrations with the involvement of the public, as in the case of the TOK Grupa in Zagreb.

The importance of these molecular activities lies in the inverse relationship between visibility and invisibility that they call into play, just as in the end of the humanist perspective that they pursue, both for Petr Štembera and the OHO Group or in that of Pécsi Műhely, amongst others. The landscape is transformed almost imperceptibly, precisely because every hierarchy between humans and nature is cancelled out in favor of a non-Anthropocentric ecology. But, above all, the task lying behind these activities is the inherent opportunity to indirectly criticise the political climates of the moment, using the concept of the environmental crisis which, as such, apparently seemed to be detached from expressly ideological implications. In the meantime, in contrast, the intent was precisely that of laying claim to a political solution. Marko Pogačnik states that, if in the Yugoslavia of the late 1960s, ecology might appear to be subversive, it was because it “called into question the assumption that the Socialist government could organise everything perfectly.”

This is why any discourse relating to the relationship between art and ecology in the post 1968 period cannot help but begin with a paradigmatic change and with an institutional criticism that discovers the environment (in its broadest sense) beyond the exclusive reduction of the revolution to the subject of the proletariat. Never mind the linguistic leap over and above the regulatory, artistic genres and the dreadful repertoire of the available fields and methods! It is rather the disciplinary limits, the assigning of roles and functions, the distribution of the appointed spaces that were exploded. A “sort of general friability of the soil” – as Foucault would have said – replaces the solid (and presumably unchangeable) terrain of institutions, of total- itarian knowledge, of classic organisations, of pre-established identities, and of predefined sequences. It is here that intellectual functions and fields of expression undermine the regime of capitalist production. In other words, they do not limit themselves to shattering linguistic institutions, sexual norms, or the devices of subjugation of the self, but also manage to sabotage production systems, moving away from work identities, from regimes of intellectual ownership, and from the exclusive assignment of creativity to the artist or the author.

The pamphlet Peace with the Earth was published by the Swedish suffragettes and peace activists Elisabeth Tamm and Elin Wägner in 1940, after the outbreak of the Second World War. Elisabeth Tamm served as one of the first women in parliament and was an organic farmer. Elin Wägner worked as a writer and activist on matters of women’s rights, peace, and ecology, and was a member of the Swedish Academy. The authors’ observations and proposals connect questions of agriculture to those of custody of land and habitats, where the ‘arrogant desire’ to own land must be overcome.

There is no question that ecological ideas have by now acquired a central role in contemporary episteme. In contrast, the heuristic function that these ideas can assume in the current polarisation is questionable: that which, over the last decade, has identified the environmental crisis with the (categorical and totalitarian) concept of the Anthropocene. […] Nonetheless, if it is true that the concept of the Anthropocene has its origins in this “change in state” of human activities, the impression remains of being witness to a new form of universalizing anxiety (impatience) that is ready to re-establish and recapture the ecological discourse within a to- talitarian and centralizing narrative, in a sort of modernist, meta-narrative to whose liquidation the environmentalism of the 1960s and 1970s (with its movement-based and destituent nature) had contributed.

Sowing Somankidi Coura. A Generative Archive is a long-term research endeavor initiated by Raphaël Grisey in collaboration with Bouba Touré. The project revolves around the permacultures and archives of Somankidi Coura, a self-organized cooperative along the Senegal river. The cooperative was founded in 1977 by a group of former African migrant workers and activists in France after the Sahel drought of 1973.