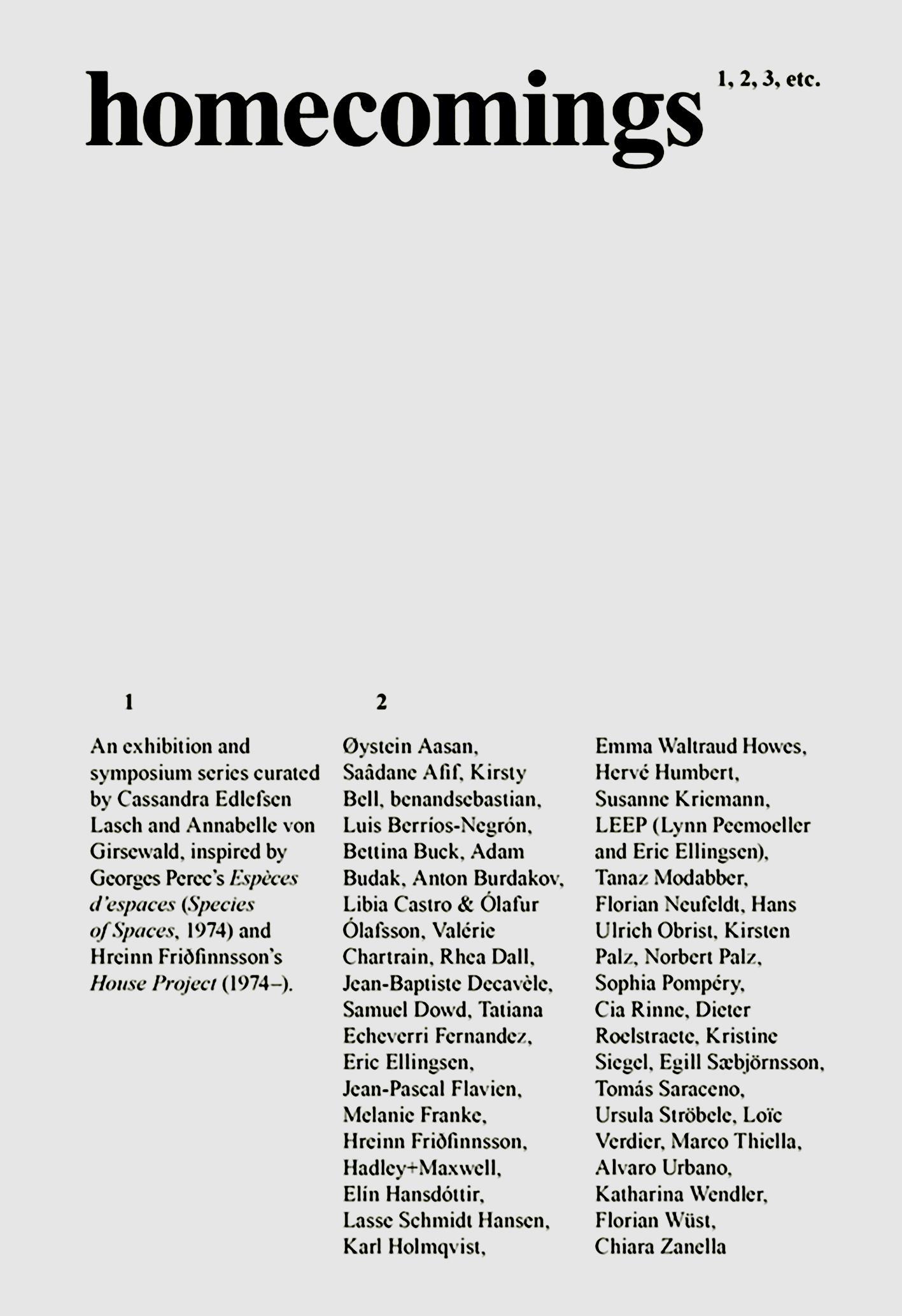 What is lost and what is found in the process of returning home? homecomings revisits, through varying means of translation, spatial and conceptual loci of homecoming within artistic practice. The exhibition and symposium series, from which this publication stems, draws its principle inspiration from the architectural and linguistic returns and repetitions punctuating artist Hreinn Friðfinnsson’s House Project (1974–) and author Georges Perec’s Espèces d’espaces (Species of Spaces, 1974).

In 1974, through an ephemeral gesture, Friðfinnsson claimed the whole universe within the site of a small house, turned inside-out, in the middle of an Icelandic lava field. Encountered only through happenstance or hearsay, a timeless lore grew around the house. House Project became a resonating series of works, appearing in multiple iterations, inversions, and reductions in form. Also in 1974, Georges Perec set out to approach the topic of space, creating a telescopic “journal of a user of space” by layering deliberate and protracted observation with writing constraints and wordplay. Perec starts with the page and zooms outward to space itself, always mirroring and reflecting the influx of the everyday in his call to read and reread surrounding spaces.

Testing the concept of “homecomings” against a number of artistic practices, this volume grows out of an imperative to act according to the referentiality hallmarked in the conceptually rigorous works of Friðfinnsson and Perec. homecomings 1, 2, 3, etc. opens a flood of personal wellsprings, where no two connotations align perfectly. The collected contributions oscillate between self-referential modes—creating full-circle loops within singular practices—and far-reaching trajectories, gaining momentum and associations upon every rereading. Like Perec, many works call for an attuned presence, and in so doing, proffer a homecoming at the very site of reading.

To Navigate Backward: Resonating with Zapatismo a book-within-a-book, the first of three mouvements (as in a musical composition) is a collection of essays titled When the Roots Start Moving: Chto Delat and Free Home University—investigating predicaments of rootedness and rootlessness and notions of belonging and of displacement across different geographical and epistemological coordinates.

Ankersentrum (surviving in the ruinous ruin)

Fight-Specific Isola traces the long history of the Isola area of Milan and the organic, spontaneous progress of the Isola Art Center over the past 12 years. Featuring texts and many images, the book tells the story of an artistic and urban transformation, led by artists, who often had to invent tools and concepts along the way. This publication serves as an example of how to act on the ground in today’s urban condition. Different narratives of history, artistic intervention and action allow the reader to trace the complex idea of collectivity, solidarity and fight-specificity. Testing new terms such as dirty cube and dispersed center this book shows a possible way to respond to the constant pressure of neoliberal development and gentrification.

This monograph has been published in connection with the MAXXI’s Premio Italia Contemporanea prize that Giorgio Andreotta Calò won in 2012 and was developed in collaboration with him focusing on his installation Prima Che Sia Notte. The work of Calò — performative and ephemeral — rests at the intersection of art and architecture. He intervenes on buildings and landscape, appropriating and transforming architecture and space into symbolic and aesthetic experiences. His most significant works include a series of walks that took him 1,600 miles through France, Spain, and Portugal, or 98km along the abandoned coastal train line in Lebanon, or the appropriation of the abandoned parliament building in Sarajevo which he illuminated from sunset to sunrise with an artificial light.