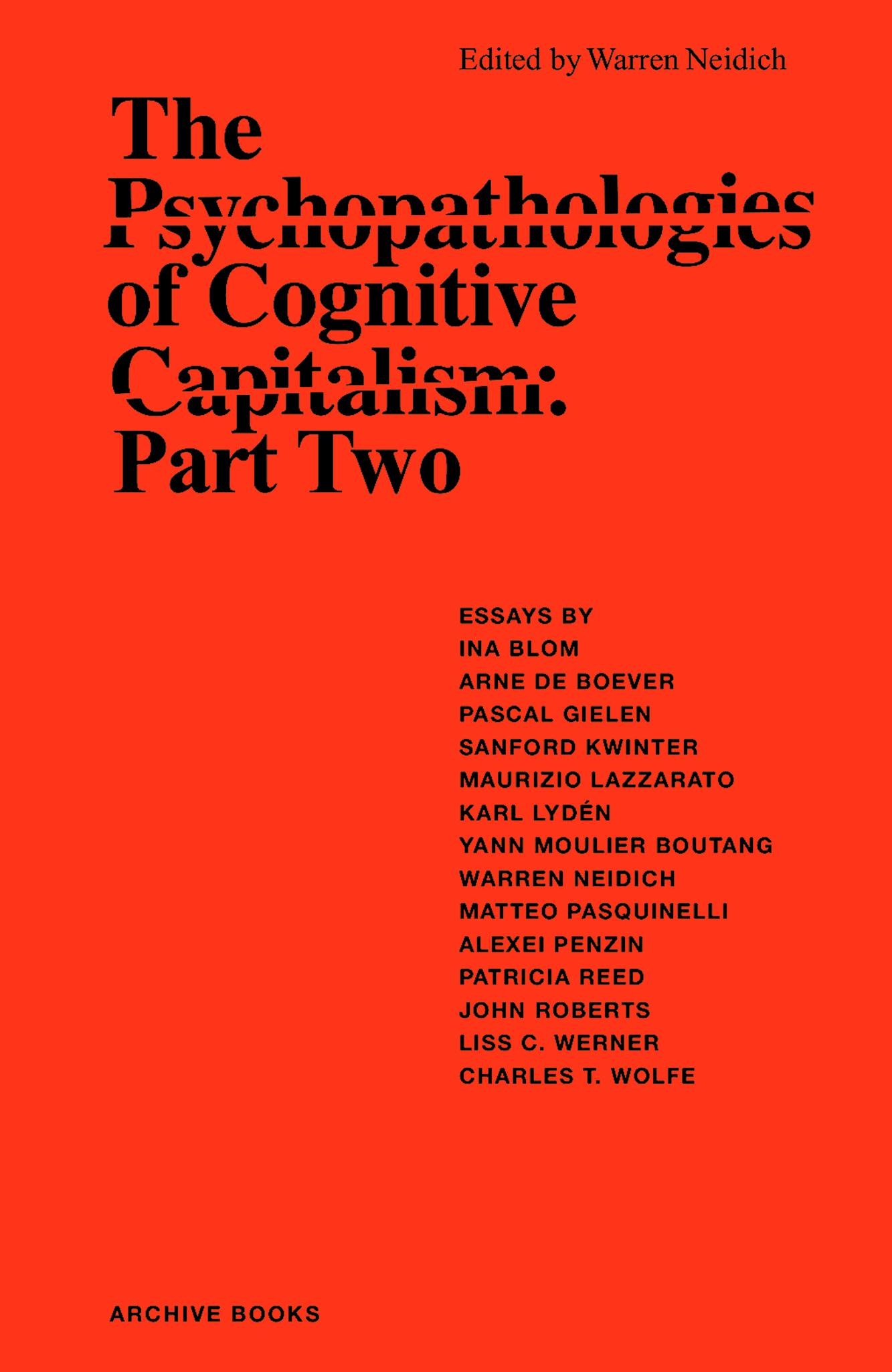 The Psychopathologies of Cognitive Capitalism: Part Two is the second volume in a series which maps out the complex terrain of cognitive capitalism as an ontogeny in which its earlier phase has transitioned into a later phase that we are now beginning to experience. This volume collects together papers from a conference of the same name held at the Institute of Cultural Inquiry, Berlin, in the spring of 2013.

The first part of the book delineates the recent emergence of characteristic psychopathologies of cognitive capitalism, which have resulted from the unique concatenation of social-political-psychological-economic relations that have produced distinct stresses and forms of derangement upon the factory of the brain.

This leads to the second stream, referred to as ‘the cognitive turn’ in cognitive capitalism. For example, as a result of the necessity for an efficient brain-mind to labor in the advanced and constantly accelerating conditions of the knowledge economy highly sophisticated and nuanced forms of attention have become compulsory well beyond what was considered essential in the older regimes of the modern. As such new dispositifs of normalization and governmentalization have arisen to, on the one hand, diffuse the attention necessary for multi-tasking, and on the other, to enhance the production of a hyper-attention. It is upon these and other similar conditions that this book concentrates. It calls for the identification of the causative factors of these psychopathologies as well as attempting to invent the counter conditions with which to thwart their emergence.

The Psychopathologies of Cognitive Capitalism

* Access to the PDF of this publication and Archive Books’ digital repertoire for a year.

By drawing a connection between a local condition such as that of an alpine valley in Italy – the Valle Camonica – with its artisan knowledges and some untranslatable words belonging to languages from across the globe, artist Stefano Boccalini brings out territoriality and biodiversity as new-found precious awareness against loss and homologation.

They inhabit while working

Elsewhere critical thinking and mundane life have followed separate paths, one rending the other impossible or irrelevant. Somehow, in some worlds, you can’t do one while doing the other. In Jaana Laakkonen’s book we have a record of the successful transgression of this binary prohibition developed through years of careful artistic practice and living with reading.

To Navigate Backward: Resonating with Zapatismo a book-within-a-book, the first of three mouvements (as in a musical composition) is a collection of essays titled When the Roots Start Moving: Chto Delat and Free Home University—investigating predicaments of rootedness and rootlessness and notions of belonging and of displacement across different geographical and epistemological coordinates.